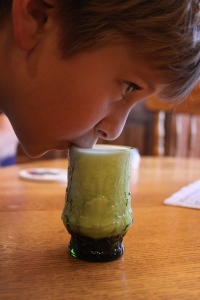 He’s my middle boy, right on the verge of turning 9.

He is amazingly creative and compassionate and energetic.

He has his own website that has short stories and facts about all the toys he collects. He can recount facts about Moshi Monsters, Club Penguin, Webkinz and other toys in great detail and with great enthusiasm. He created a story with several chapters and great descriptions. He loves animals and loves being outdoors.

He can make you laugh at the drop of a hat and he has this fantastic smile that he cannot contain when he is slightly embarrassed but also delighted that you are paying attention to something he is doing.

He is stubborn as anyone you’ve ever met. I mean, really, really stubborn. I’ve done the dance with him many times.

He loves deeply and is deeply hurt when someone mocks him or when he thinks they think he is stupid or less than who he truly is.

He has an innocence that will capture you, and yet he can push your buttons like no one’s business. He attracts kids like a magnet, though. We went by to play with his friends at school one day and I could tell he was concerned about how he would be received. He got out of the truck by the playground and was swarmed by his friends…they all came and hugged him and were chanting “Nate”.  He was smiling that embarrassed-yet-pleased-smile.

Today was not such a great day with homeschool.

We got a late start because we went to bed late last night since we stayed late at Biblestudy.  Everything was late.  I was irritable because I don’t like being late.

Maddie was fussy because she has a cold and teeth coming in, and she’s 15 months old.

Nate likes to goof and I was not in the mood. Now, I had given the boys a 15 minute freeze dance session to disco, so I was hoping to have spent some of the energy. Not quite enough.  I could not get Nate to focus and to answer the questions I was asking about our reading.  I left him to it and walked out of the room frustrated.

That frustrated feeling that makes you want to scream or cry or just fall on the floor and pray that God will do something with your pathetic parenting skills. That frustration  where you know you have lost your patience too early and you know they are just being kids, but you still feel it boiling up within you and you just can’t help it.
I went to walk out of the room and that’s when I saw that he was crying. Very quietly, not putting on a show, not asking to be paid attention, but very quietly crying.

I know it will not be the last time I will do this, and it surely is not the first.  Homeschool will provide many more opportunities where I am going to be pushed, and I already am aware that part of the frustration is that I am not as prepared as I would like or need to be…so the frustration is amplified by guilt. There will be times that I will not guide him correctly or I will not contain my frustration appropriately and I know there will be times he will cry again.

And yet, I know that this boy is going to teach me more about life than probably anyone. He is going to push me to be a better parent. He already has changed us. If there is one thing I pray with consistency it is to allow these kids to be who God has created them to be….not who I might want to mold them to be.

He is an image bearer of an amazing, creative, imaginative God.

I hope that days like today are fewer than days like yesterday when everything went smoothly and we enjoyed each other’s company and we were happy to be home together. I hope that the reality of homeschool in the Wolfe Academy meets the vision we have and the reality that God intends and enlarges our idea of what this is all about. I hope that days like today are fewer, but that they make me stop and think and be aware of the gifts of these kids…and never take for granted the joy of being able to parent them.