Well, I said yesterday that it has been busy, although not terribly hectic. I’ve posted a few things on Facebook about our activities, but thought I would take advantage of this venue for a little more of a peek.

We had our wonderful Christmas program at church, which I mentioned, but let’s see if I can get the video on here….

That was so fun! I can’t help but grin when I watch Sammy, and Nate and Zach seem so mature. We love our fellowship, and the Christmas program is always a blessing.

This year the theme is Joy to the World, and I find myself filled with a sense of joy and excitement when I am in the midst of this people.

Today was the first of the Christmas parties for school.  Three years ago Nate’s kindergarten class came through for a progressive party, and I guess we established a tradition. Sammy is the kindergartner now, with the same teacher…the wonderful Mrs. Burris. His giggling group of 5 year olds appeared this morning.

The house smelled sooooo good and looked cheerful and warm, especially on a drizzly grey day. 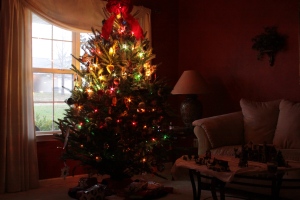 Sammy was a little excited!! 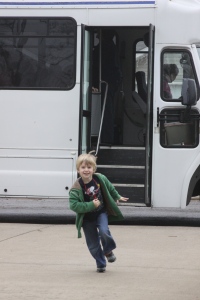 Nothing better than kids at Christmas time, and it is a blessing to be able to have the group at the house. They all had fun decorating cookies, and that made me think of Christmases growing up when we made literally hundreds of cookies, carrying them around to the neighbors. Maybe that is a tradition that needs to be renewed…. 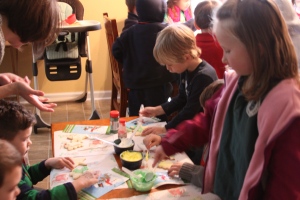 After the kids left our place they went to another home for a craft and then I met them at their next stop…a nursing home. They were a little tentative when they first walked in, but several of the guests responded quickly and the kids warmed up. The children sang several carols and I could hear a couple of the people singing along. 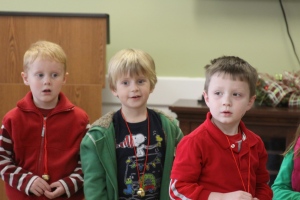 After they sang a few songs the kids came out and handed Christmas cards they had made to the guests, wishing them a Merry Christmas.

After they had handed out the Christmas cards, there was one woman who wanted to hug the children. She was the most responsive of all the guests and had been singing along. As the kids would come up she would take their little heads in her hands and kiss them on top of the head. It made me wonder what stories she had and what her knowledge of our Savior was.

It was a great moment to see Sammy so at ease interacting…this is my boy who does not like to be noticed (I know, you’d never know that). He is coming out of his shell and becoming a great kid. Here’s the woman the children were hugging:

So the sights have been filled with images of the children celebrating Christmas and being aware of those around them. Being aware of the single mom the other day with the six children. Being aware of the neighbors who were evicted from their home because of lack of employment. Being aware of the delights of decorating cookies with friends, of singing songs and riding buses on field trips and of how much a hug and a smile can mean to someone aching for some contact.

I know I posted a lot of pictures in this entry, and I was aware as I took them that there is this deep desire to “capture the moment”. Great company tagline. It’s true though. I take these pictures and these videos because there is an awareness that all of this goes so quickly, and I want to hold on to it a bit longer. I want to be able to reflect and look back and enjoy these moments again.

Hoping that the sights and sounds, and yes even smells, in your venue are bringing delight as we near the day to shout and celebrate that our King came, and will come again.

4 thoughts on “The Sights and Sounds (and I wish smells!) of Christmas in our world…”