I am sitting in my favorite coffee shop, sipping great coffee and listening to good music mixed with the chatter of happy folks. I have a pen to use in my journal, but the pen is not cooperating; the ink just won’t flow very well and I find I have to re-trace the lines. I am, however, stubborn.

I want to use this pen, and when I am done I want to slide it back into its flowered sleeve. Because the lilac pen and the flowered sleeve hold more than a simple writing instrument; they hold the memories of the woman who used to write with this pen. Back when it flowed well.

The pen and the holder are stylish and I can remember Mom pulling them out of her purse and using them. I can remember even that act being done with a sort of elegance.

Mom was always stylish, and she carried herself with this confidence and elegance. Everywhere. People noticed her. 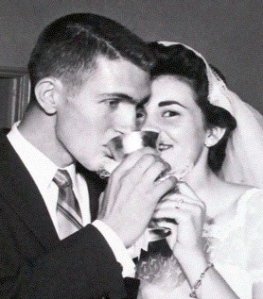 Dementia has stolen her thoughts and some of her elegance. Not all, though. She still carries herself with dignity and she still speaks with an innate politeness and compassion.

However, she simply is not completely there…she is a shadow of herself. A physical reminder of the strength of character, sharpness of wit and commanding presence she once had. We catch glimmers.

I realized that sometimes I am not much different.  Some days I am a shadow of myself. I am caught in the mundane and the demands of the day, the trivialities and the noise, and I am lost. Sometimes the broken world is stronger than the creativity and the wonder that I desire to develop. The strength of character and the intellect I inherited are stifled by a weariness of a broken world.

I catch glimmers of who I could be, of who I would like to be.

Those are the moments God graces me with a reminder.

A lavender pen tucked in a floral case. Words of grace and beauty from authors who live more fully in the moment than I.

Words of grace from a Creator who understands the weariness because He took on the flesh we wear and He walked:

And I am sure of this, that he who began a good work in you will bring it to completion at the day of Jesus Christ

Words of reality that although this world in which we walk and live and breathe is marred by brokenness and by sin, there is still healing and there is still hope. Words of reality that although sometimes we only see the glimmer, there is One Who sees more and Who knows the whole of the story. He sees the result of the storm we walk through and sees the result of the long obedience.

“When I asked my mother why the trees were so much larger on the ridge than anywhere else, she replied that it was because the winds were the strongest and the storms were the fiercest on the ridge. With nothing to shelter the trees from the full brunt of nature’s wrath, they either broke and fell, or they became incredibly strong and resilient.
God plants you and me in our faith as tender saplings then grows us up into “trees of righteousness,” using the elements of adversity to make us strong. And He leads us to endure, not just somehow, but triumphantly as we choose to praise Him, regardless of the storms swirling within us or the winds howling outside of us.” -Anne Graham Lotz