I have to tell you that generally our life is fairly boring.  We homeschool, so three days of the week we rarely leave the house. We like it that way. We have our challenges with life like anyone, but for the most part we just make it through the days and life is pretty normal.

That is not to say that it has always been that way. I do not consider myself incompetent or boring. I have lived in several places, including short stints in Amsterdam and Hungary, even a summer in a commune in Chicago. I love road trips, ride motorcycles and horses. Shoot guns. Yep. I can handle myself.

So, last night when the little bitty light came on in the truck notifying me that the air pressure was off in one of my tires I was not terribly worried.

So I pulled over.  I could literally (yes, appropriate usage) hear the air hissing out of the tire when I opened my door. Huge bolt, meet back passenger tire. 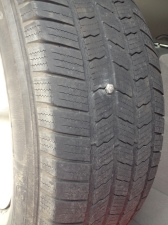 I have changed a few of tires. This truck though, has a beast of a spare tire to get off. You have to manipulate the pole from the jack through an opening on the bumper, blindly, and find a catch and then you can turn it and lower the the tire from under the truck. Sounds simple. I watched the AAA guy work on it for over an hour one time and just about cry before he got it down. Um, I don’t have AAA anymore because we never used it…dumb me.

So, here is where the story is worthy of a blog post.

We live in a small town in the south. I am forever grateful for this. We were 10 minutes from home, we were in a parking lot where I knew we would find help. I went in one place but there was no one who could help. I went in the next place and a very kind man said he would come change the tire.

45 minutes later he still didn’t have the spare lowered. I told you…I hate this spare. However, he tried and kept trying.

Oh, and it was 20 degrees outside.

Then I thought of a man who owns a coffee shop in town who has a similar truck and I wondered if he had ever changed the tire. I called. He not only took my call, he came from the grocery on his way to the shop.

Took him 30 minutes to lower the tire.

The flat was stuck to the truck.

We kicked it. We stared at it. We hit it with a mallet. He went to a tire shop and asked. He went and got wood to lower the truck onto.

We told the kids to pray.

They prayed, and rummaged through the groceries in the truck.  And they never whined…which made me want to kiss them all.

We lowered the truck truck and I rocked it back and forth on the wood and finally…finally, after 2 hours…the tire came loose. After that it was the simple changing of a tire. We were home within twenty minutes.

Instead it happened in our little small town where two very kind men took two hours out of their evening to help. I know they probably took it as a challenge at some point, but they didn’t have to do it, and it makes me terribly thankful. I had a list of other friends I could have made my way through, but something made me call this acquaintance..and I’m thankful I did.

There are moments where we see the character come out and we are thankful. My kids saw that people are kind. My kids also saw that we figure stuff out.

Sometimes it is worth simply saying that.

Oh, and for my local friends…it was Jeff from Authentic…so if you need coffee, go by and tell him he’s a great guy.

One thought on “Flat Tires Lead to Thankful Hearts.”