Oh my word it has been a long time since I have had a chance to write a post!! We had a wonderful trip to Colorado for July 4th, spending time with 21 family members. During the trip, however, the laptop died and I am hoping to replace it this week…the lack of the faithful laptop has led to life being lived offline. Not such a bad thing.

However! There is good reason to be back on now….a friend from here in Nashville has done something fairly remarkable.

She has written a book.

I say that that is remarkable because I cannot imagine doing such a thing. I love reading, I love imagination, and yet I have never been able to come up with something I thought could hold folks attention.

A.E. Howard has come up with something that does just that. 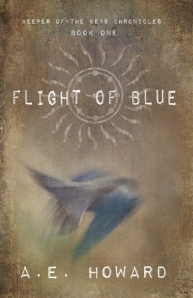 The Flight Of Blue is a wonderful journey of imagination. We began reading it at our bedtime, after having just finished another Andrew Peterson novel. This book has some stiff competition with Peterson and recently The Wrinkle in Time on our list…and it held up well. The boys were caught up right away.

I know that the book has their attention when they have to stop me to ask questions. Not obvious questions that should have been clear…but imagination questions because their minds are working.

Oh, and of course that moment when I declare the reading to be done and I am met with cries for “Just one more chapter…” I love that. So, the book officially launches today!! Woohhoooo!! (If I ever actually write a book, and it launches….you will hear me shout with much joy!) Genuinely, you should check this out…I’ll write more on it as we finish the book (we are in the midst of the adventure), but take the time to read this little excerpt, then skip over to A. E. Howard’s launch site at the link below. Oh, and enter to possibly win a copy, or just go buy one! Let me know what you think….

Here is the excerpt:

Serina stopped for a moment and checked to see how Kai was absorbing.

“I don’t understand something,” he finally ventured. “If both my parents are Guardians–”

“Then why are you here? Good question, we don’t know. But we suspect you have the ability to act as both Guardian and Keeper, to unite both roles like the Guardians of old. And something is stirring, something is awakening in this realm for recently there have been more Keepers born, though none like you that we know of, than in many centuries before.”

Kai was speechless for a moment. “And you know for sure that I’m… what did you call me?”

“You’d be The Keeper of Keys. And, yes, I’m now pretty sure. See, Keepers can’t sense the other realms or the rips, but Guardians can. At some point in a Guardian’s life, around the age of twelve or thirteen, they awaken to the other realms and then have to choose whether they are going to live into their role as or not. All the signs point to today as the beginning of your awakening to the other Realms. You heard the music, the drums, and Reginald went against his instincts and spoke to you because he sensed who you are.”

Most of this doesn’t make sense out of context, I realize, but I pulled it out because I really like this bit about what Kai is. All day, things have been getting weirder and weirder for him, ever since he and his friend Ellie stopped to see if they could help an injured possum on the side of the road. And then Kai’s life started changing faster than he could process. Here, he discovers that he’s something special, born into a role that no one has had for hundreds or perhaps thousands of years, and what’s more, he’s born into a special time. He’s awakening to the Realms, and he’s barely got a clue what that means, but he’s already rescued a sorcerer and been hunted by a monster, and the weekend hasn’t even started